This post is rather long, so here’s an executive summary:

The wind speed and direction outputs from the Airmar PB200 sensor is filtered with some kind of moving average filter such that any sudden change in wind speed or direction input results in an output with a lag on the order of a few seconds of time lag.
For example, here is a trial we did of measuring the PB200’s wind direction sensitivity by suddenly rotating the PB200 while facing a fan. The response time of the PB200 is on the order of ten seconds. 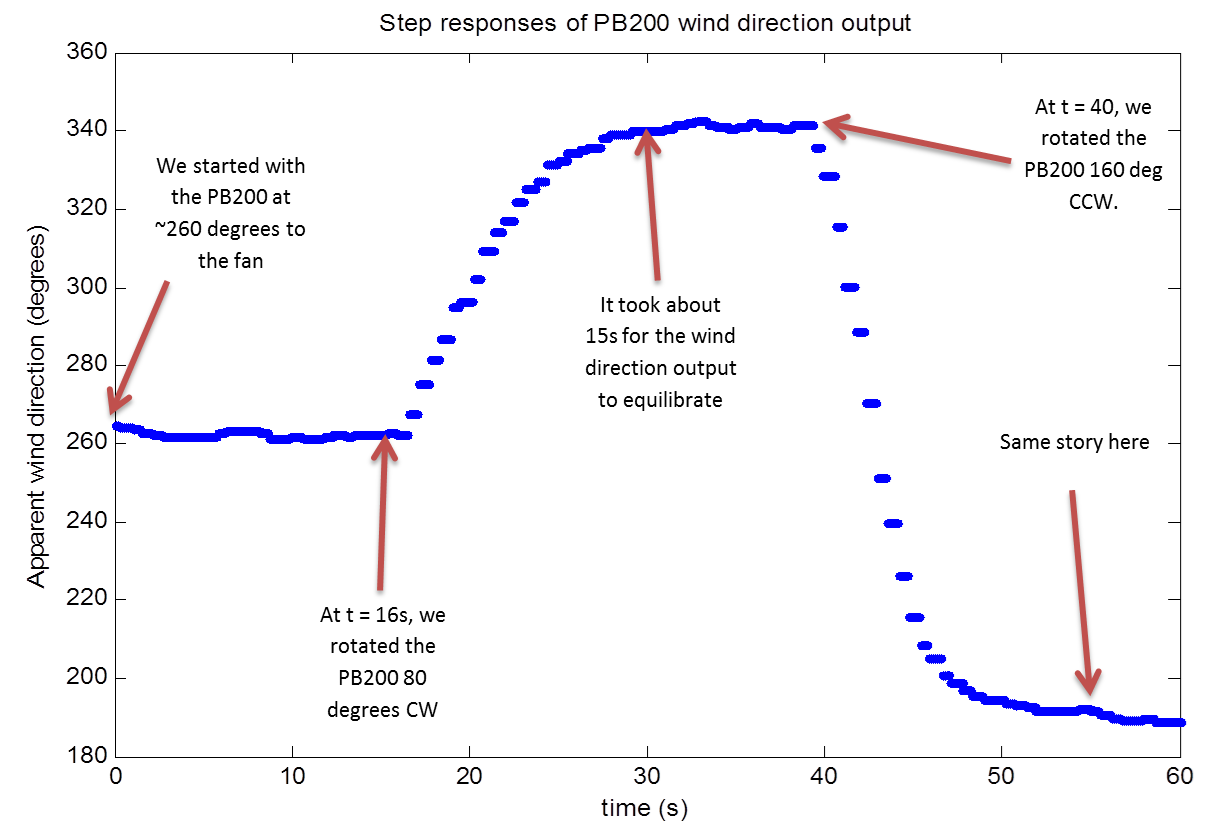 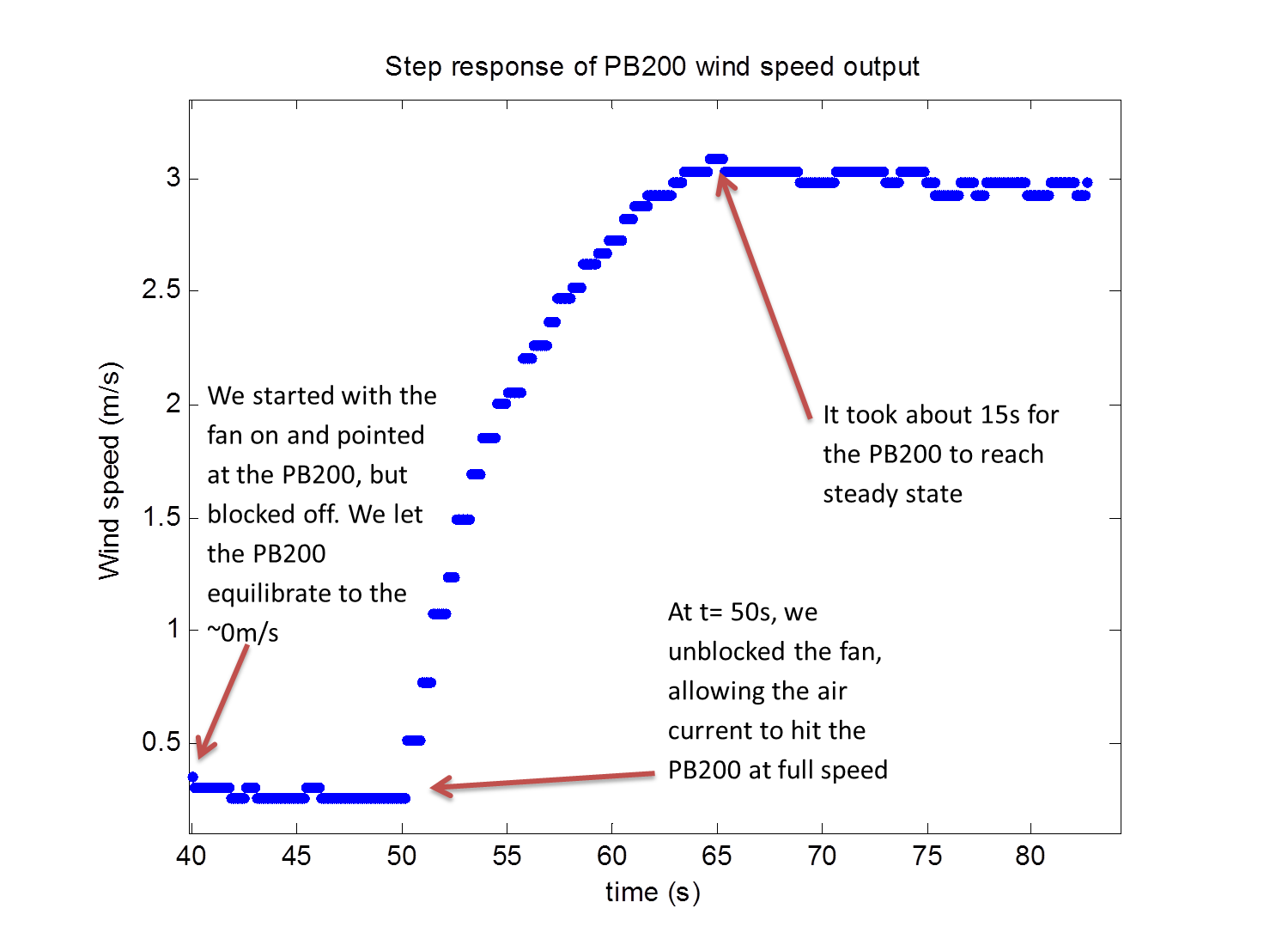 Obviously, this kind of response is not ideal, since our boat is making decisions about how to trim the sails and rudder on the order of seconds, not tens of seconds. Deviation of measured wind direction from actual wind direction could cause huge miscalculations. Wind speed sensitivity is not as important as wind direction, but could still affect performance.

Here’s a video showing us doing an impulse and step response of wind speed. Ideally we’d use a wind tunnel, but we hacked something together with a fan and a big wooden board

We called Airmar and their sales rep. informed us that indeed, the output of the wind sensor is filtered “over many many seconds” since that’s what the majority of users (presumably owners of non-robotic boats) demanded.
Evidently, some customer segments  had similar needs as us and wanted a more sensitive wind sensor, so Airmar planned to release a sensor with unfiltered output later this year. The sales rep. told us that they may be able to get us a sample of this sensor early. The sales rep. also promised to ask the engineering department and find the filtering specifications for us, but Airmar never responded to our repeated email requests. Thus, we decided characterize the filter ourselves and create a “unfiltering filter” in software.

The theory behind unfiltering the PB200 is rather simple#. The PB200 applies a filter h(t) to the input signal (in this case, the actual wind speed or direction). We want to create a filter in software that negates it with impulse response h^(-1)(t)#.
Ideally, the system diagram would look like this:

The output signal from our filter will inevitably have noise or other source-induced error (denoted by s(t) in the diagram above). We want to minimize s(t) when we construct h^(-1)(t)

The first step to constructing h^(-1)(t)  is finding the impulse response h(t). As the name suggests, this is as simple as giving the PB200 a sudden, but short, gust of wind for wind speed, and a quick rotation back and forth for wind direction. We used the fan and wooden board technique described above for generating the short and sudden gust#. We smoothed the data a bit to get the following impulse response for wind speed:

It was a bit tricky to collect data for the impulse response of wind direction. We ended up taking the time derivative of the step response to get the following plot:

where * is the convolution operator. Taking the Fourier transform of both sides, we get:

H (ω )⋅H ^(-1) (ω)=1
So the Fourier transform of h^(-1) (t) is just the reciprocal of the Fourier transform of h(t).
However, the problem with this direct approach is that any small noise in H(ω) becomes really big as one takes the reciprocal. So we used a more sophisticated approach that compensated for this effect for small values of H(ω). We used a threshold gamma inverse filter adapted from here.

We encountered some problems applying this technique to the wind direction data. The main problem was the data wrapping that is inherent with angular measurements (when wind is blowing at 350 degrees, a slight movement can cause the data to jump to 0 degrees). We resolved this by playing around with some angle unwrapping functions. In the end, we used the filter coefficients generated for wind speed for angle. It seemed to work rather well.
The PB200 measures wind speed by pythagorating# x and y-direction speed measurement vectors. It turns out that the individual x and y-direction speed measurements are filtered before being summed. Evidence of this comes from our experiments when the PB200 is at steady state wind speed, any rotation causes the speed to quickly drop down to 0 before slowly coming back to steady state. This is something we can’t really address, so we’ll have to hope that this effect doesn’t affect things too much during competition.

We’ve already begun to do some wind tunnel testing to take more accurate measurements of impulse responses and better characterize our and the PB200’s filter. Stayed tuned for more news on that front.

If you have any questions for us, any suggestions, or just want to know what our filter coefficients are, please let us drop us a comment and let us know!

One thought on “Unfiltering the wind sensor”